The era of painful SQL Server development is over. SQL Server code name Denali will be shipped with a new toolset with code name “Juneau” that has a amazing improvements for database developers. Server explorer gives you Project-Oriented Offline Database Development feature, as written in an MSDN article:

Larson et al. from Microsoft Research have this paper in ACM SIGMOD 2007. They introduce an interesting sampling mechanism over SQL Server using materialized views. Materialized views are the same as indexed views. If you create an indexed view over a table or a bunch of tables joined together, using their technique, you have a tidy sample for your data which is kept up-to-date automatically.

What caught my eyes was that their base sampling approach is interestingly simple:

The additional __RAND column gives a random distribution on data which can give us a statistically valid sample.

The answer for the previous challenge

This is the question in my last post:
If we have two coins which one is double headed, and we toss a coin and is head, what is the probability for the other side to be a tail?

If your answer is 1/2, then you are wrong (as I was). I thought this is the same problem as: what is the probability of a selected coin being a normal coin which is 1/2.

I was told that the answer is 1/3 and for some time I was convinced that 1/3 is the right answer but after thinking more about the problem. I thought again in calm and again realized how naive I was the first time.

To understand the problem better let’s rephrase it as below:
We have two boxes one contains a pair of black beans and the other contains a black bean and a white bean. We pick a bean from a box and it is black. What is the probability of “picking another bean from the same box and it being white”?
Look at the figure below: 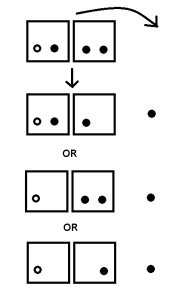 Today I have been asked the following question: If we have two coins which one is double headed, and we toss a coin and is head, what is the probability for the other side to be a tail?

I will write the correct answer and why in comments.

It is pretty useful to check space usage of your tables. SQL server gives a nice system stored procedure called sp_spaceused that returns what you want. You can run the following script on your database and export the results to excel.

You can come up with nice graphs showing why your data base is big and what partitioning strategy to choose. For example I ran this query for a project with a 10GB database. I could not understand why only a few million small records  occupy 10GB. The result was expectable. There was an exception log table which occupied half of the space and dropping that table saved so much time for everybody.